GET STARTED
Menu
Previous Next

As you know, a consistent presence in social media is vital to create a brand. It is hard to remain consistent on different social media accounts on a regular basis without a scheduler. Iconsosquare is a social media management service that enables you to manage your Instagram, Facebook, and Twitter on one dashboard.

Iconosquare is a very famous platform with very happy customers. However, like any other tool, it has some deficiencies. Are you up to subscribe to it? Read its review before making up your mind!

It is a very powerful social media management tool. It provides users with a scheduler for posts of three social media platforms; Instagram, Facebook, and Twitter. Iconosquare visualizes the scheduler for users so that they work with it easily.

Plus users enjoy the precise metrics and data of Iconosquare to better their growth.

One of the main reasons Iconosqaure could keep its users very happy is the user-friendly customer service.

Reviews of Iconosquare on G2.com 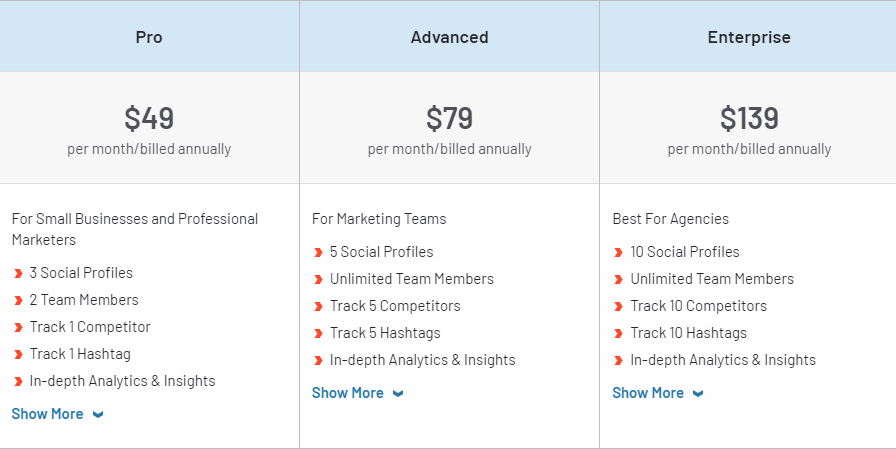 Regardless of how high reviews of Iconosquare are, the platform is accompanied by some drawbacks, which we mean to cover here.

“They don’t have any kind of hashtag generator tool.” 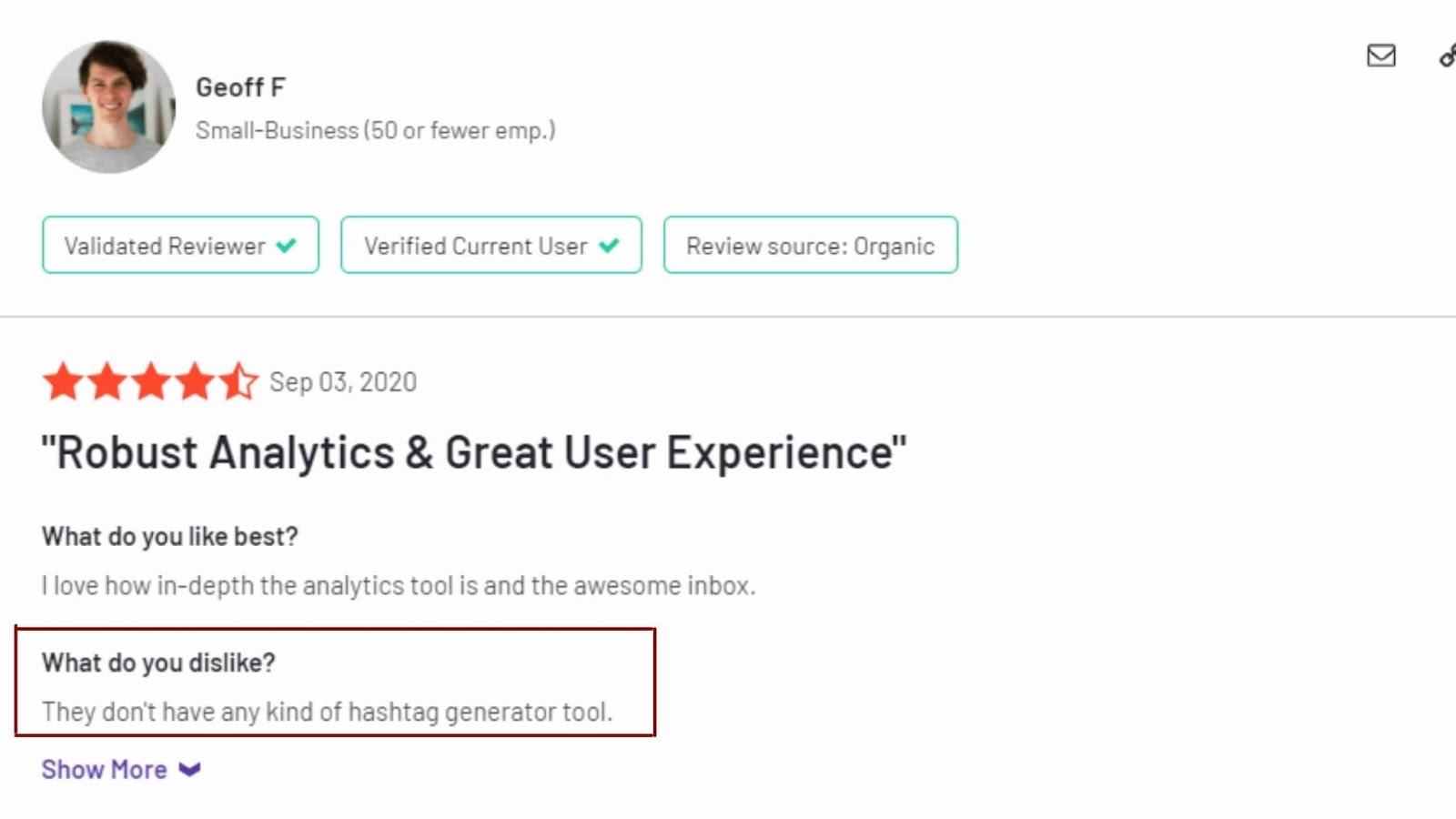 Iconosquare does not have a built-in hashtag generator

Finding good hashtags is one of the most confusing things users have to deal with. However, hashtags have a considerable impact on reach, engagement rate, and followers. Considering this flaw, you know you can not count on Iconosquare in terms of hashtags.

According to reviews, the users come across glitches on Iconosquare from time to time! 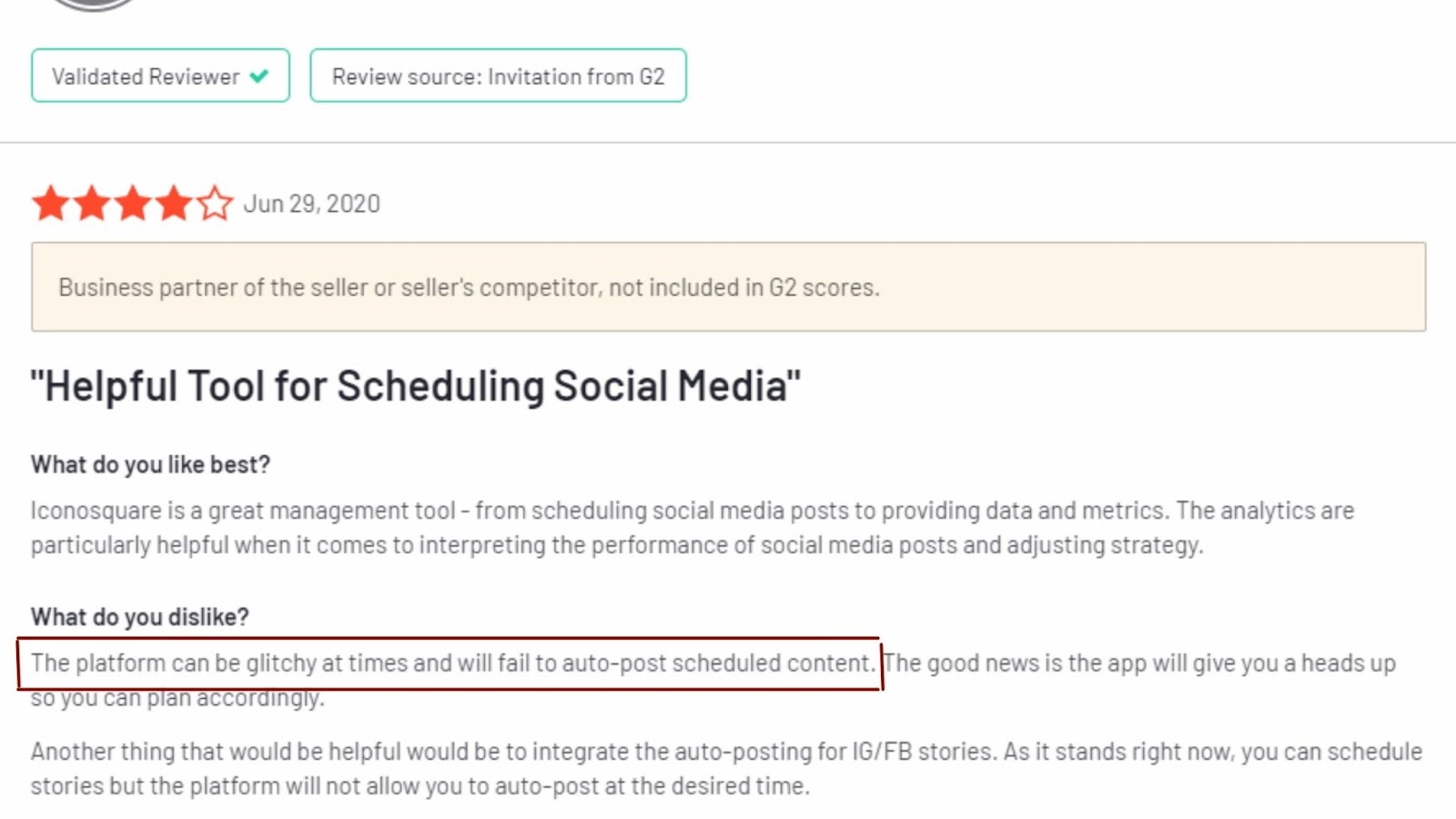 Many reported glitch on Iconosqaure 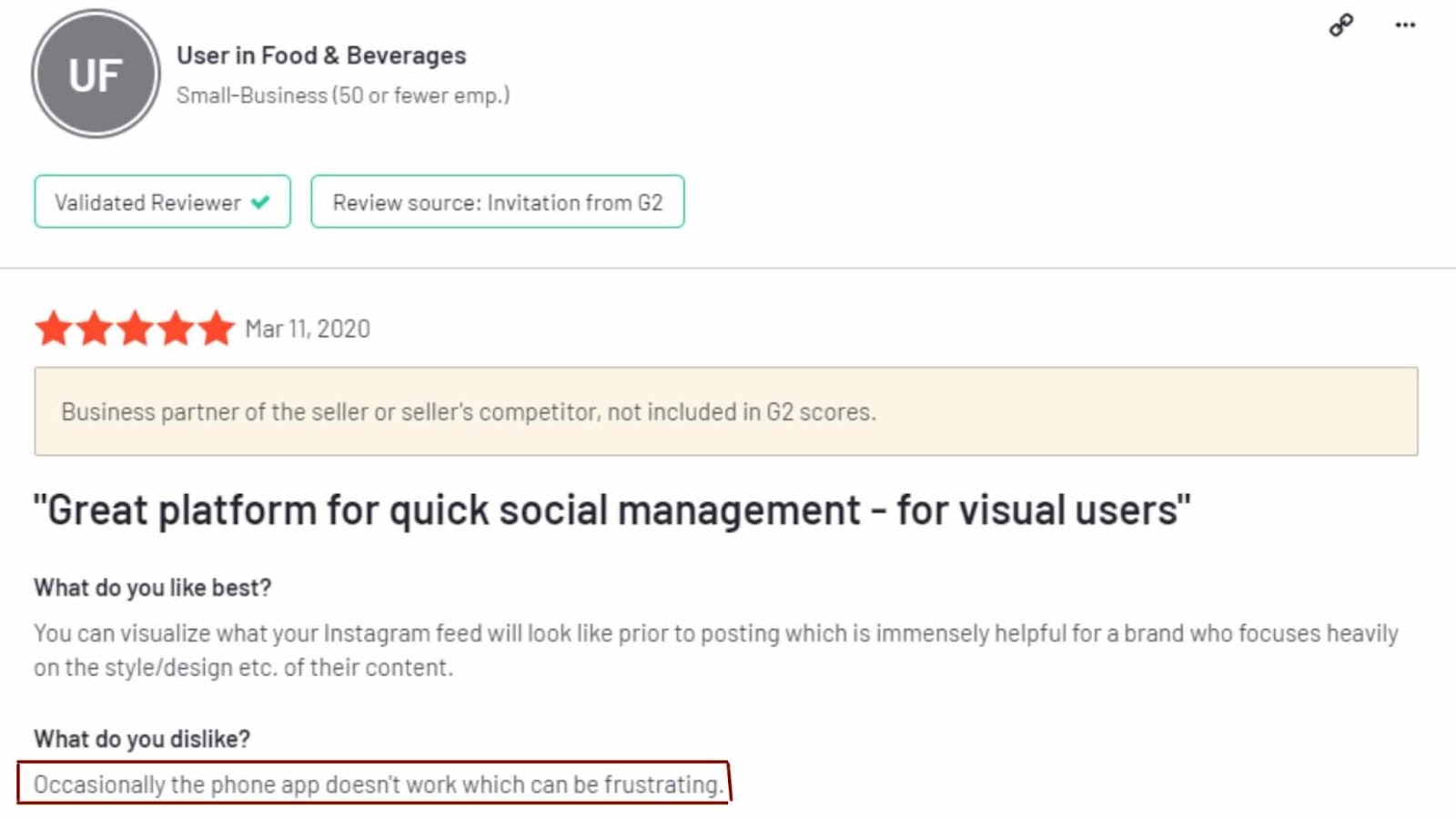 Even happy customers reported the glitch in the app 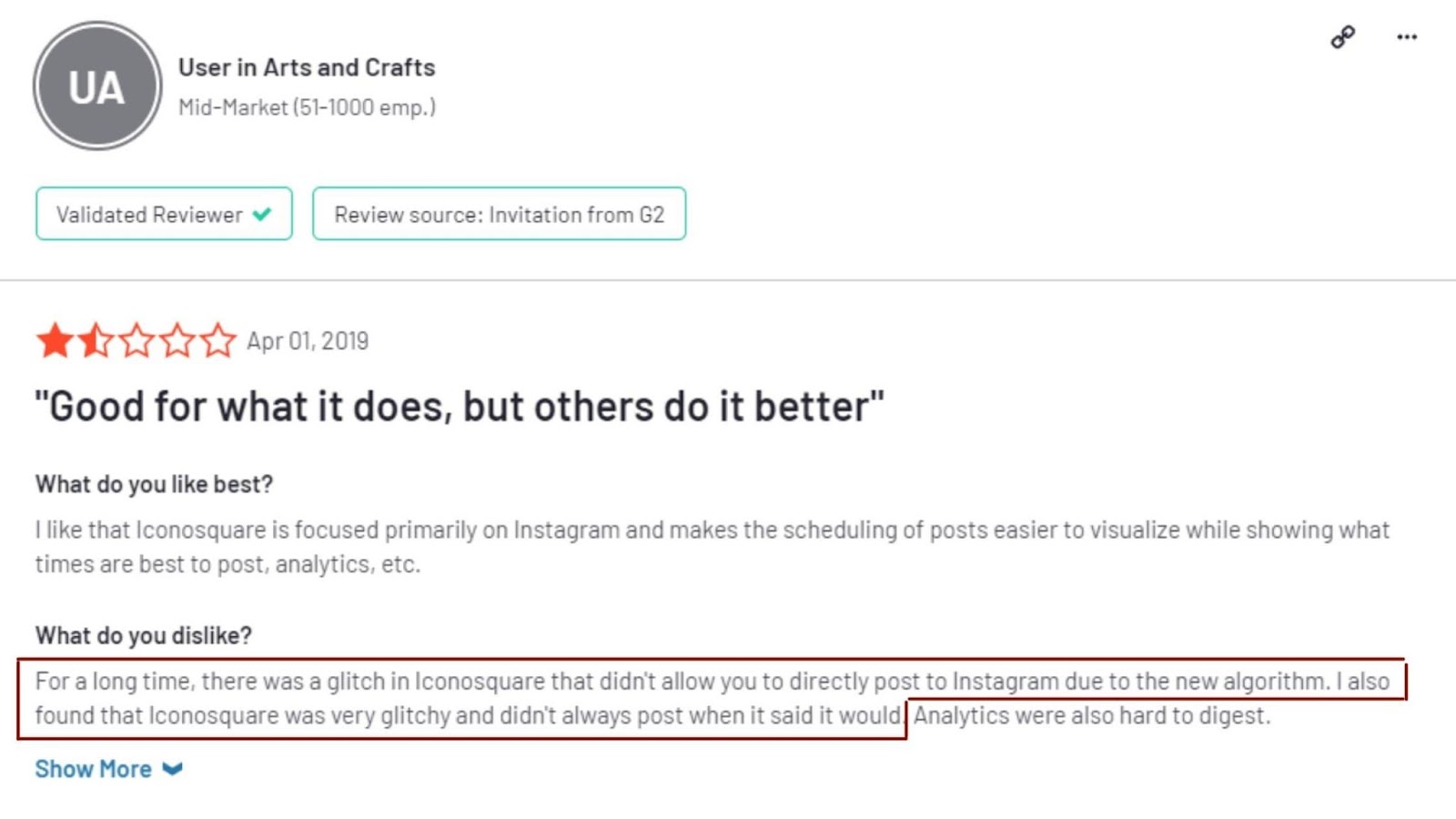 No Integration For Stories

“Another thing that would be helpful would be to integrate the auto-posting for IG/FB stories.”

Reviews of Iconosquare on G2.com

And the last drawback is that it does not have free plans. You are only provided with 14 days of free trials.

Demerits of Iconosqure had us come up with three alternatives for the platform. Each alternative is presented with its own pros and cons. So make sure you read each carefully before you pick any of them. 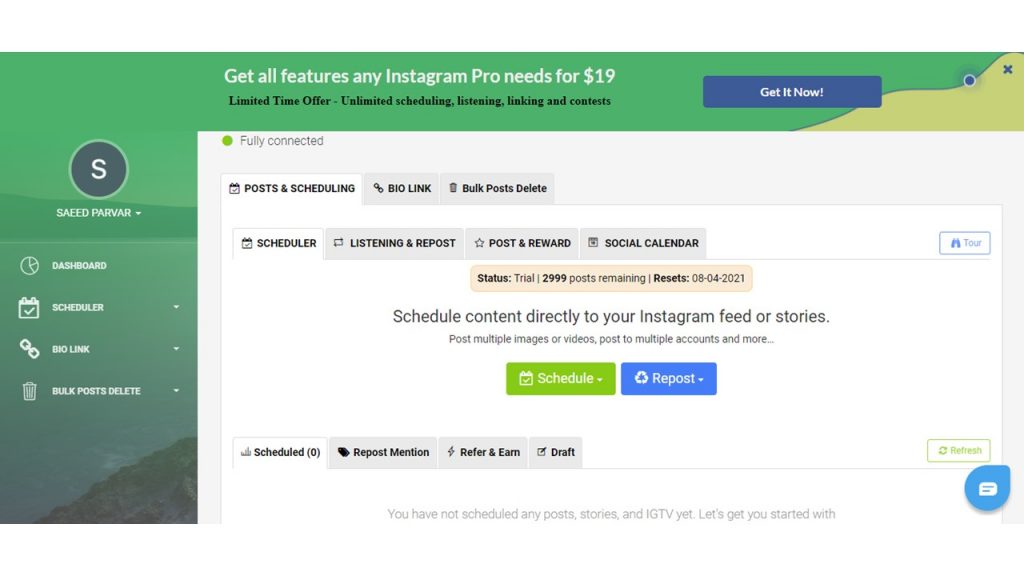 AiSchedul is an Instagram management tool with every feature you would ever expect from an Instagram service. On your dashboard, you can manage your Instagram, monitor your rivals through its listening tool, and run giveaways. So far, AiSchedul was successful in pleasing its users.

Reviews of AiSchedul on Trustpilot.com

AiSchedul is compatible with all devices. It is mostly used on desktop; however, its app on the phone is available on the Play Store. Download now. 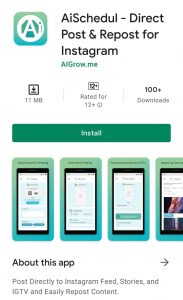 Merits Of AiSchedul To Iconosquare

AiSchedul has always got high reviews from users, and no one has ever reported any malfunctions on AiSchedul. “It works properly”

Reviews of AiSchedul on Trustpilot.com

That would suffice for AiSchedul to be presented as an alternative. But, AiSchedul has more advantages over Iconosquare.

AiSchedul Has A Precise Hashtag Generator

Iconosquare does not have a hashtag generator tool. This is while AiSchedul finds the most searched hashtags (demonstrating the search volume) relating to your niche.

It is worth mentioning that you can also schedule your post to be deleted. 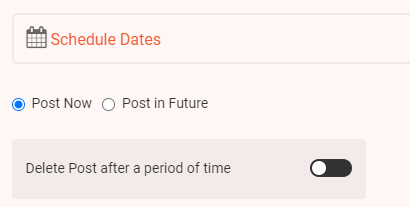 It is mostly used for giveaway posts.

To learn how you can schedule Instagram posts with AiSchedul, watch this video.

With AiSchedul You Can Schedule Stories And IGTV

While iconosquare does not schedule stories, AiSchedul not only schedules stories, but also provides you with stickers, emojis, and built-in editing tools.

Another outstanding feature of AiSchedul regarding stories is that when scheduling your posts, you can add the post to the story for more reach and engagement rate.

Moreover, you can schedule IGTV videos on the desktop or cellphone. This is a feature barely any tool has.

This is another feature of AiSchedul that makes it unique among rivals.

You would be surprised to see that is totally doable with AiSchedul.

All you need to do is simply paste the link, and the video will be uploaded.

Now just publish it or schedule it for later.

The whole point of using a management tool is to increase the presence in social media. However, being present is not only about scheduling but about content as well.

Make sure you always add a location to your posts because that increases your findability.

Posts with a location get a higher engagement rate

Also, be aware that on the AiSchedul dashboard, you can tag users as well.

AiSchedul offers two paid yet reasonable plans at $7 and $23. However, if your business is short on money, you can subscribe to its forever-free plan. 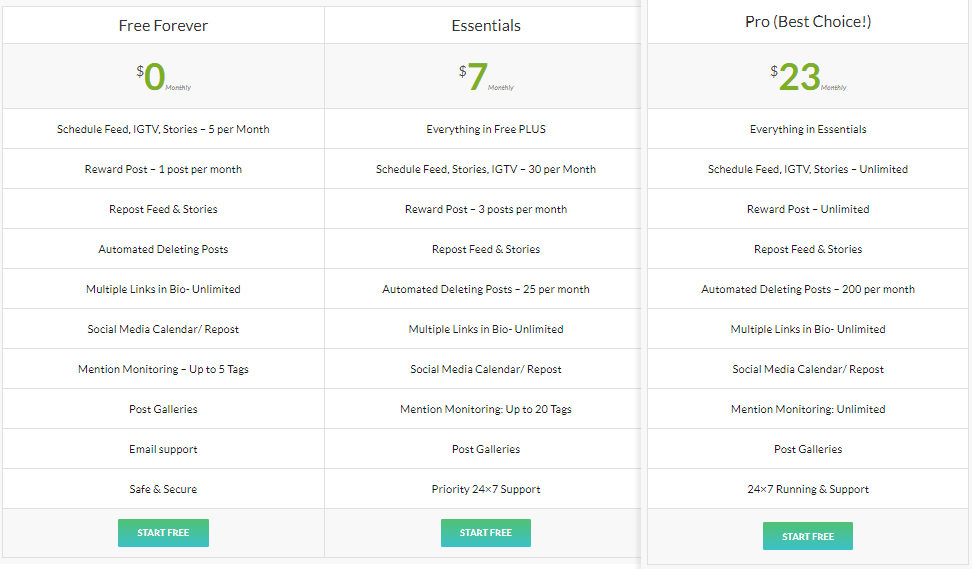 Plans and pricing of AiSchedul

If you are after a well-designed scheduler like Iconosquare, only better? Give Plann a try. Plann was first available for iOS users, but later, they designed an app for android users as well.

This IG scheduler has a very advanced built-in editor that makes you needless to extra editing tools. With Plann, you can schedule content for Instagram, Facebook, & LinkedIn.

If you like to schedule IG stories as well, you can count on Plann. And the final advantage of Plann over Iconosquare is hashtags generator.

Plann reviews on the app store are very high; however, after the last update, users reported login glitches.

Plans and pricing of Plann

If you subscribe to HopperHQ, you do not need to use an editing tool to edit your posts, because HopperHQ embeds a very professional editing tool. 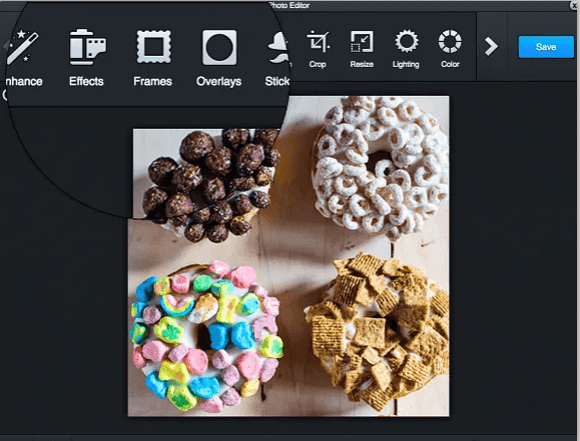 Although Iconosquare is a good social media platform, it has some drawbacks. Having a look at this table makes you decide with open eyes. Pick one platform and start growing today.